Within the AMBER consortium, the University of Oviedo has been working on the Nalón River as a case study. With 140.8 km in length, an average flow of 55.18 m³/s and a watershed of 3,692 km2, the headwater of this mountain river is at an altitude of 1,443 meters within a pristine mountainous area. Located in the central part of the region of Asturias (Northwest Spain), Nalón River runs through a socio-geographic space in economic decline due to the closure of coal mines and the progressive abandonment of agricultural and livestock activities. The Nalón valley hosted the most productive mining area in the region, especially in the middle part of the river. Today, it only keeps one active coal mine “Pozo Sotón”. After the closure of most mines, the Cantabric Hydrographic Confederation (in charge of river management in Asturias) has carried out several restoration programs in the river valley and its main tributaries. As a consequence, water quality improved in the middle zone in the last decade, although this has not happened downstream, where the river hosts most of the exotic fish registered in the region.


Nalón River has seven dams and reservoirs built between 1960 and 1970, two of them (Tanes and Rioseco) in the upper reach within a protected area (Redes Natural Park) which is a Natura 2000 site and Reserve of the Biosphere.

In 1992 a new dam was projected upstream within the protected area jointly promoted by the Regional Government of Asturias and CADASA (Asturias water consortium). Its construction was approved in the Spanish Royal Decree (Law 9/1998) for water and energy supply, including water supply for steel companies, and for compensatory flows to maintain biodiversity (it was intended to enhance the water quality up to be apt for salmonids downstream). The project was initially presented in 2001, but was finally rejected for inclusion in the Spanish Hydrological Plan for that year.

Two years later, in 2004 the dam project grew stronger and was proposed again before the Spanish Parliament and the regional parliament of Asturias. These legislative movements caused a public debate that was opened that year. The project was to raise a dam of 98 meters in the valley of Caleao capable of containing 33.4 cubic hectometers to supply the water needs of the central area of Asturias and steel companies. In the upper Nalón and also in the rest of Asturias, a broad public protest rose against the construction of the reservoir. Citizen associations used arguments based on the potential effects of the projected dam on the valued autochthonous brown trout inhabiting river headwaters; interruption of recreational uses of the river due to water discharges; sedimentation and eutrophication of the river ecosystem; impacts on elements of cultural heritage such as ancient watermills, Roman bridges, medieval churches and archaeological sites located in the valleys of the river system. In addition, more water supply was deemed unnecessary in Asturias for its rainy humid climate. Opposition to the reservoir sparked protest demonstrations that shaped a civil platform created in 2006 with the intention of defending the Redes Natural Park (UNESCO Biosphere Reserve since 2001) and the valley of Caleao. Groups of citizens from all over Asturias camped by the river between September 24 and 26, 2006 to hold a protest conference against dam plans (Figure 3). The government of Asturias sent the Civil Guard (a branch of the Spanish police) to control activities and avoid public demonstrations. Two NGO of the platform submitted initial allegations against the project draft –before its inclusion in FEDER operational program: ANA (Amigos de la Naturaleza de Asturias) and La Cirigüeña. 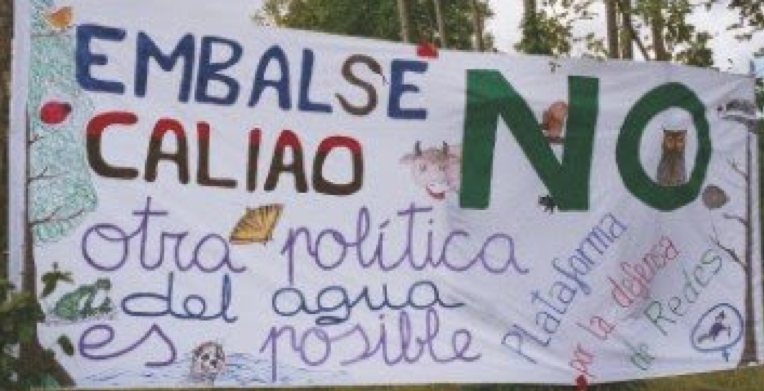 Despite the opposition of the citizens to its construction, the regional government continued with the project of the Caleao reservoir. Thus, the project was included in 2007 in the EU FEDER operational program for Asturias region 2007-2013. http://ec.europa.eu/regional_policy/en/atlas/programmes/2007-2013/spain/operational-programme-asturias. On page 130 of this program it’s stated: “The four projects mentioned by La Cirigüeña [Caleao dam and reservoir …] will not receive funding from FEDER nor the Cohesion Funds, so the allegations against these projects were refused”.


In 2007 and 2008 the Conferences against the plans and for protecting the Biosphere Reserve were held again, with no reports of interferences from the regional government. In the revised hydrological plan of the Occidental Cantabric region where Asturias is included (National Water Council 13 December 2012, the construction of Caleao dam was subsumed in the measure named “Improvement of water supply of the central zone of Asturias”. The plan continued alive and was presented publicly and in writing. It remained deposited in the headquarters of the Regional Government for public consultation and allegations by any private party, public institution, NGO, or individual. On 30 June 2015 the period of allegations expired.

The Spanish national 2015-2021 Hydrological Plan studied the allegations and refused them, thus the project passed to the next phase as Approved. The construction of the Caleao dam was foreseen any time within the next years, by 2021.

After its approval, the dam project continued to be much contested by ecological and conservationist associations because it would affect the Natural Park of Redes (Natura 2000, LIC, ZEPA, Biosphere Reserve) and several protected species within. A conflict between companies of ecological tourism and the new dam was also expected. On May 11, 2018, the Asturias Parliament (Junta General del Principado) approved a Resolution for the Asturias Regional Government to officially renounce to the Caleao dam project in the Plan of Water Supply. The discussion, arguments, and voting results can be found in the Record of Sessions of the Junta General del Principado de Asturias, X Legislatura, Series P, number 167, available in Spanish at:
http://anleo.jgpa.es:8080/documentos/Diarios/PDF/10J167.pdf


The proposition was presented by Izquierda Unida party, on the basis of a new Agreement between CADASA (water consortium) and the multinational steel and mining company Arcelor-Mittal which has investments and interests in Asturias. In that agreement there is a plan of exploitation of the River Narcea (a branch of the Nalon-Narcea basin) channel, which includes special costs of water for its factory in Veriña (Asturias). Since one of the reasons for building the dam was water supply for steel companies, the Caleao dam project was traded with CADASA for the new agreement
(https://www.20minutos.es/noticia/3337826/0/junta-insta-al-principado-incluir-renuncia-expresa-al-embalse-caleao-plan-abastecimiento/ )

Following the political decision adopted in the Parliament, the budget project of Asturias Principality for 2019 presented by the Regional Government the 7 of December of 2018, and approved the 27 of November of 2018 in the Junta General del Principado, recognizes the so called Pacto del Narcea (Narcea Agreement) between Arcelor-Mittal and CADASA, and liberates for free CADASA’s use the 60 millions of euros retained for the construction of Caleao dam. The document can be found in Spanish only at


With this final disposition the project of the Caleao dam can be considered definitively cancelled within AMBER lifetime and the Nalón River waters can keep flowing.