On Monday 28th November 2016, IFI celebrated its involvement in the AMBER project with an official launch at its Citywest HQ. Staff from IFI were joined by engineers and ecologists from relevant government departments, public authorities and by university colleagues for talks by James Barry, Paul McLoone and Alan Cullagh of IFI that provided context for this new project looking at Adaptive Management of Barriers in European Rivers. At the launch, James Barry described how IFI is contributing to AMBER by compiling data on riverine barriers around Ireland working towards a national database. As part of AMBER, IFI will look at improving fish passage at large weirs on the Munster Blackwater to open up spawning habitat for sea lamprey, a priority species for conservation. Inland Fisheries Ireland has undertaken a number of fish community surveys as part of the AMBER project to investigate the impact of the weirs, and mitigation measures, if any on the fish community composition. Speaker Paul McLoone described boom-boat electrofishing surveys of the current fish community structure. Boom boat fishing has allowed fish communities to be surveyed in the impounded water upstream of the major weirs as well as in the naturally deeper areas of the main channel of the Munster Blackwater. Attendees at the launch also enjoyed a talk by Alan Cullagh from IFI Clonmel on the growing complexity of designing and planning fish passages. Alan illustrated his talk with examples of barriers that were removed or that were modified with a fish pass or a fish-friendly by-pass channel. One such project on the Nore was Castletown Weir, where a rock ramp recreates a gently sloped riverbed, allowing fish to swim freely past the weir. Castletown, before and after situation
James King, who leads the AMBER project in IFI, was very pleased with the interest in the launch and points out that this interface of theory and practise is one in which IFI and its predecessors have always been active. Through links with EU partners, the AMBER project should be fruitful in identifying new technologies and strategies that IFI can use to mitigate barriers to fish passage and to enhance the connectivity of river ecosystems. 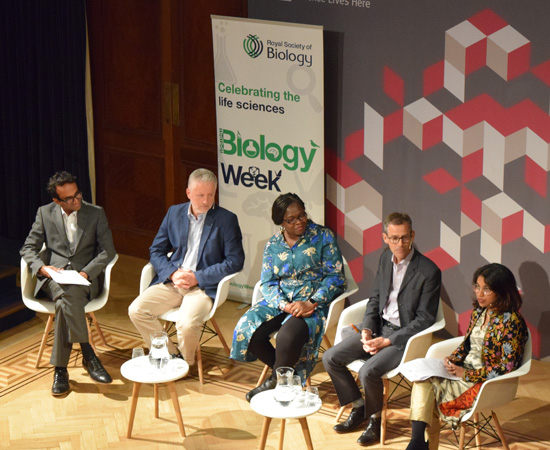