There are potentially up to 1.7 million barriers blocking European rivers (Belletti et al, in prep). To effectively manage our rivers we need to know which barriers are causing the most problems and which provide an opportunity for development (e.g. hydropower). One of the key negative impacts of barriers is that they can impede the movement of fish. However, evaluating whether fish can effectively pass over or through a barrier is difficult, as passability is dependent on a number of factors (e.g. barrier height, water depth, slope, barrier type and presence of vertical drops etc.) and varies depending on the swimming, jumping and/or climbing capabilities of each fish species. Around the world, numerous assessment protocols have been formulated to estimate the passability of riverine barriers but these have generally been developed in an ad hoc fashion, resulting in major inefficiencies, and duplication of effort and frequent repetition of mistakes. There is a need to utilise a consistent approach for evaluating barrier passability at a European level and produce tools that allow for the easy collection and processing of the required data. 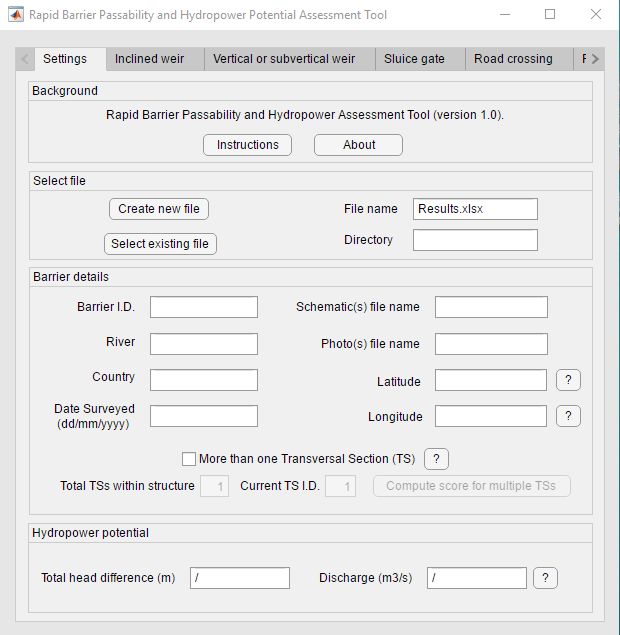 After critical evaluation and field testing of the three most well developed and widely accessible protocols already in existence in Europe (SNIFFER, ICE and ICF) the French ICE protocol has been selected as the protocol of choice to champion as the European standard for assessing barrier passability for fish. The French ICE protocol is the least subjective and produces passability scores for a greater number of species/lifestages (n = 47), whilst requiring fewer physical measurements to be recorded compared to the other fine-scale protocols. Extensive assessment of over 50 barriers in Ireland has also proved that the passability scores it produces are comparable to those of the other more resource intensive protocols. To facilitate the easy use of this protocol, researchers at the University of Southampton have automated the assessment process by developing software that enables users to rapidly produce passability scores for each species/lifestage at the click of a button.
In addition, to generating passability scores, the software estimates the hydropower potential (Watts) at each site through a simple assessment of discharge and head drop. As such, the software produces data that can be used to populate barrier mitigation prioritisation tools and efficiently help with catchment level management decisions.
The Rapid Barrier Passability and Hydropower Assessment Tool and user manuals are available to download from the AMBER website (https://amber.international/software/).

Dr. Jim Kerr –Dr. Jim Kerr is a Research Fellow working on the AMBER project at the International Centre for Ecohydraulics Research (University of Southampton). He has a background in a diverse range of aquatic sciences with a focus on fish behaviour in response to complex flow conditions.